On 27 June 1963, the Postmaster General, Reginald Bevins, told the House of Commons that he had asked the Independent Television Authority to prepare for the coming of a new ITV service, in 625-lines UHF in black and white. Once the ITA’s plans were approved at the end of 1964, physical preparations would begin in 1965 and the new service could be on air by 1966 or 1967.

This didn’t happen – the change of government in October 1964 scuppered the plans, as the Labour Party was ideologically opposed to expanding commercial broadcasting and would have preferred a BBC-3 educational television service, incorporating their planned University of the Air.

Here are the words of Lord Hill of Luton, the chairman of the ITA, from August 1963 as he announced what the Authority planned to do with the existing ITV service in the run up to ITV-2.

My main subject today is the shape, the pattern, the structure. Two main changes lie ahead. Firstly, there is the change to 625 lines and UHF. Secondly, there is the declaration of intention of the Government announced by the Postmaster-General on 27th June in relation to the second Independent Television service. You will remember his words: ‘if all goes well and there are suitable companies willing to offer their services to the ITA, the Government would certainly hope during the autumn of 1965 to authorize the physical build-up of the second programme, starting in the areas of big population’.

With these words in mind the Authority’s planning for the future must be based on the assumption that there is to be a second Independent Television service over much of the country. Therefore it has to begin as soon as possible to plan and prepare for Independent Television’s second phase – the two service phase.

On the assumption that the Government’s intention is fulfilled, the Authority has already resolved how the second phase shall begin. It contemplates that for the areas of denser population there shall be competition between two independent companies operating over the full week, and so for the viewer a choice between two independent television services. According to what is decided in the mapping out of these areas of denser population, there will be six or more seven-day companies competing in pairs. The Authority proposes, as soon as it has completed its urgent work in relation to the interim phase, to get down to the task of planning that second phase on these lines.

The basic plan for the second phase, which I have described, will change the face of television over much of the country. There will be changes of coverage, in terms of both areas and days. There will be openings for new companies in these highly populated regions and no doubt smaller companies then operating may wish to consider applying for the larger franchises.

Clearly the same contract cannot apply to the second phase with all its profound change as well as the period immediately ahead – the interim phase. It follows that the immediate contracts will have to end when the second service begins.

What should be the duration of the contracts soon to be awarded? In other words, when can we expect the second service? The Postmaster-General said it could be on the air in 1966 – and then went on to stress what he described as the very real hurdles. The actual date will depend on, amongst other things, the P.M.G.s decision, after having the advice of his Television Advisory Committee, on the method and timing of duplication on 625 of the two existing television services – a complicated problem which I will not go into now except to say that it affects the dates by which the Post Office could have the links available. In all the circumstances, the Authority’s judgment is that the second service will become possible at some time between the autumn of 1966 and mid-1967.

As the immediate contracts have to be related to the expected date of the launching of a second service, the Authority has decided that their duration should be three years, subject to four points. The first is that should the second service begin before the expiry of three years – this is possible but by no means certain – then the contracts will terminate when it begins. Secondly, should the announced date of commencement of the second service be after July 1967, contracts will continue (subject to a reconsideration of rentals in the light of experience) until the second service arrives, up to a total period of six years. Thirdly, any contract terminated by the arrival of the second service and applying only to an area in no way affected by its introduction will be renewed, subject to the six-year maximum and to reconsideration of rental. Fourthly, if for any reason it becomes apparent that a second service cannot be introduced before 1970, there will be no extension of the three-year contracts and the Authority will re-examine the whole pattern on the basis of a single service.

The question which now arises is whether there shall be a fundamental re-casting of the pattern from next July, bearing in mind that a drastic re-shaping is likely to occur two or three years later. Clearly it would be wrong to do anything in the interim phase which prejudices the long-term plan. A number of ideas, as you know, have been put forward. It has been suggested that a seven-day service should be introduced for the Midlands with or without a change from the 5:2 pattern to a 4: 3 pattern in London and the North. You know the objections equally well. The 4:3 pattern, involving the addition of a day to the weekend and a reduction of weekdays, is in conflict with the pattern of most of our lives – five days work and two days recreation. For myself I dislike this variation.

Should a seven-day service be introduced for the Midlands, the successful company knowing that a few years later there will be a competitor in the same area and for the same days? Some might think yes. On balance, because what lies immediately ahead is an interim period during which the second phase will be planned and those years will be the period when the expanded competition of the BBC will be felt, the Authority has decided not to submit Independent Television to two upheavals in a few years. With certain modifications, the existing pattern of days and hours will continue during the interim phase. Let me make it absolutely clear that what I have said relates solely to the pattern of days and areas – of supply that is – not of companies. Present companies and new companies are to apply for any area they choose. All bets are off and there will be a fair field for all. 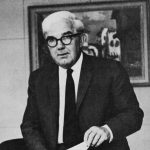 Lord (Charles) Hill of Luton (1904-1989) had been the 'radio doctor' during the war, then led the British Medical Association's campaign against the founding of the NHS. He was Postmaster General during the launch of ITV in 1955 and was made chairman of the Independent Television Authority in 1963. In 1968, Harold Wilson made him chairman on the BBC Governors.