1959 UK Eurovision Song Contest entrants Pearl Carr and Teddy Johnson invite you to enjoy a stick of Wrigley’s Juicy Fruit in the mid-1960s. This is unusual for having been used on both Radio Luxembourg and Wonderful Radio London, although in different contexts.

On Radio Luxembourg of the time, the evening was divided into 15-minute programmes, each one associated with a sponsor and, generally, a single record label. The Wrigley’s programme was fifteen minutes of Pye records, and this jingle was used during the show.

On Big L, shows were unsponsored and a mix of discs from various labels was played, with spot advertising in-between. This Radio Luxembourg jingle became a 30 second spot advert on Radio London.

Incidentally, Teddy Johnson’s other claim to fame was that he had a popular programme on Radio Luxembourg, and was even resident in the Grand Duchy in the early 1950s. 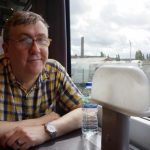 Kif Bowden-Smith is the founder of the Transdiffusion Broadcasting System