I SANG, standing under the bright finger of the spotlight in the dim little dance hall, and the screams of the girls rang in my ears.

They were screaming for me. Me. It had never happened before. I felt a kind of excitement which I afterwards had difficulty explaining in words. I was 18 and felt like King Kong.

Girls at my feet, girls all around me, girls breaking into my dressing-room… I loved it. Being truthful, I would say I’m a conceited person, but conceited was hardly a big enough word for me then.

Looking back to those days when I first appeared in public — in Tonbridge, Kent — I wince. The truth is I must have been downright objectionable. I can see myself now, swaggering around, or racing about on the motor-bike I’d bought, with my leather jacket and my guitar strapped to my back and my hair flying in the wind and my sideboards right down to my Adam’s apple.

I hope I’ve grown up since then. Conceited I still may be — but at least that conceit is tempered with a sense of humour and a sense of responsibility.

And the certainty that the screams aren’t for me but for an image… an elusive, intangible thing which doesn’t really belong either to me or the girls.

I’ve always had lots of girl-friends. But how many people would believe that I am basically shy? And that shyness made living a misery for me when I was a small boy? One reason for it was because of the way I spoke.

I was born Richard Sarstedt in Delhi, India, the son of a father who had German blood and an Irish mother. My father died when I was 12 and the family — my mother, aunt, sister and two brothers — came to England and settled in Waddon, near Croydon, in Surrey.

And I had this accent, sort of Indian. One couldn’t help acquiring it. When I started to go to school — it was co-educational — I felt very self-conscious. It made me painfully so with girls.

I remember I used to like showing off in front of girls in sport. I was a good all-rounder and it was the only way I could express my interest. I was particularly good at swimming.

It was a small school. But I didn’t dare speak to a girl until I was 15.

After that, girls began to loom large in my legend — as Beatle George Harrison would say!

When I left school I wanted to be an architect and went into an architect’s office as a tea boy. There was the girl who was the first person to tell me I could sing… the girl who pushed me into the talent contest which made it all happen and who, I think, I would have married if my career hadn’t come between us.

Then there were the two girls who were friends until the night one walked into a restaurant where I was dining the other and discovered I was dating them both. She poured the soup into her friend’s lap…

There have been other girls in my life, of course. Girls I have been genuinely fond of, girls I’ve had to be seen with for publicity, girls I’ve taken out because they were there and I was there. Girls whose faces, never mind names, don’t come to mind.

Where do I stand now? My mother looks after me well, so I’m not contemplating marriage, yet!

I am still basically shy, and fans, particularly older ones, can embarrass me. Almost always you’ll get the one girl among those who come backstage who’ll throw herself at you.

But I always think twice. As I said, I’m conceited—and that’s a help in this instance. I know these girls are only interested in the image, not me. And that makes it much easier to be sensible.

Most fans are only 12 or 13 and they promise to go away if they get your autograph. I have three or four girls who follow me all over the country.

And another 13-year-old who writes me two 10-page letters — on both sides — each week, ending up: “I love you best of anybody in the world.”

This may sound smug — but I feel a responsibility to fans like that. The ones who annoy me are the ones who scratch their names on my car or scrawl lipstick messages all over it. I’ve had to dispose of two cars because girls have made such a mess of them.

You may think a pop singer’s reputation makes girls fall at his feet? Take my word for it — it doesn’t. It could, with hundreds of girls you don’t want to know. But when, suddenly, you find a girl you really would like to know it becomes difficult… because she’s annoyed about that reputation and refuses to be added to a “list.”

Still, that’s one of the prices which must be paid. Like never being sure I can come and go peaceably from the house.

There are girls outside my home every day. They’re mostly young and just want to talk to me. But when I go to play tennis at a recreation ground nearby—though we always try and go when few people are about — it’s like Wimbledon! I don’t mind because I play a fair game of tennis.

But I’ve got knobbly knees! 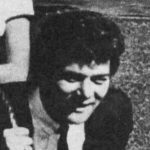 Eden Kane (born Richard Graham Sarstedt in 1940) is the brother of Peter and Robin Sarstedt. His biggest hit was 'Well I Ask You' in 1961. He still tours, when he's not playing various background characters in the Star Trek television series

Tags: eden kane, The Girls in My Life